Residence at the foot of Ymittos

13 Apr Residence at the foot of Ymittos

Posted at 21:25h in Published Projects by tsiri_pxl

The residence is located at the foot of Mount Hymettus and is developed on the East-West axis, with the main purpose of the least possible intervention in the landscape-environment, since the north-south axis has a pronounced slope of more than 20%.

So there is an operation on an area of 500 square meters. while the rest of the plot is 3500sq.m. remains unformulated.

Moreover, due to the morphology of the mountainous area in which the building is located, there are cold and intense winds from west to east, resulting in the need to create a strong boundary to the west for protection, both by the winds and by the cold. For this reason, there are only two small openings to the West, while a wall extending beyond the house is being built, thus protecting the open space in which all activities are developed during the summer months.

The ground plan is a P-shaped, creating a “closed” sheltered courtyard, where the kitchen and the dining room are spilled. In the first part of the P we find the entrance, which is through an antechamber which thermally protects the ground floor. On each side of the entrance there are the auxiliary spaces and the kitchen. On the opposite leg and the course of entrance there is a large vertical opening for both view and through-cool cooling on the east-east axis but also as a transition from the two-story living room to the lowest height entertainment area, which is essentially a hollow without openings.

The stair dominates and defines the dining area without separating it from the rest of the ground floor. At the same time, the stairway forms a large opening both at the ground floor level and at the floor level, resulting in unobstructed view during the vertical communication of the levels.

Right in front of the opening there is the “sheltered” courtyard with a sloping half-open space
who communicates directly with the kitchen and the rest of the living space.

On the floor there are three bedrooms and the bathrooms.
The corridor communicating with these spaces looks into the two-story stairway. The floor has a smaller surface than the ground floor, and the entire building is housed with a single, single roof, which follows the slope of the ground. This results in two-storey space in the living room, in the staircase and in the kitchen.

An attic is created in the kitchen which occupies the surface of the food preparation area, with the prospect of storing the food of the family. Due to the slope of the ground, the south-facing bedrooms are grounded and have direct access to the garden through a paved terrace. The main bedroom occupies the eastern part of the floor, while the children’s to the west and between them the auxiliary spaces and the sanitary facilities. 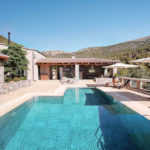 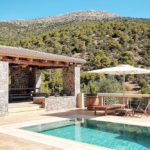 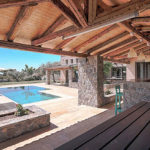 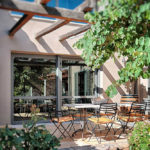 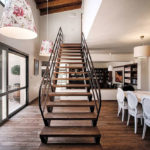 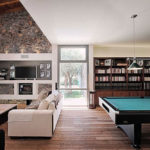 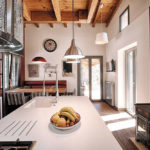 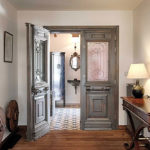 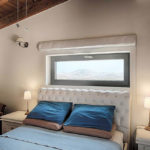 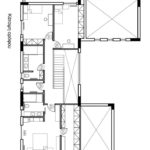